its launch in April 2016, Facebook Live video has swept the world.

As a platform, Facebook Live has unparalleled reach when it comes to reaching fans organically. Facebook’s News Feed algorithm highly prioritizes Live video, meaning your followers are way more likely to see one of your Live videos than any other content you post.

That’s why it’s not a half-bad idea to consider making Facebook Live a part of your social media marketing strategy.

You might be wondering where to start and what to do. That’s why we’ve put together this list of 10 Things You Need to Know Before You Go Live on Facebook!

10 Things You Need to Know Before Going Live on Facebook

While celebrities, influencers, and more prominent brands have the gravitas and fanbase to use Facebook Live for more casual purposes, like broadcasting their surroundings or going Live for a few minutes at a time to interact with fans, chances are you don’t have the same resources.

Because of this, you need to focus the time you spend on Live.

Ask yourself what goal you’re trying to achieve with the video, as well as if and how the broadcast will help you make it.

If you can, try to choose an objective that’s more specific and results-driven than “social engagement” or “brand awareness.” Though these things are great, they should be secondary to other goals like lead generation or sales.

Once you and your team have settled on an objective, plan your video with that objective in mind. It should reflect in the topic you choose, as well as the way you present it.

For example, if we were putting together a Live video for a fitness center that wanted to highlight the benefits of personal training, we might choose to do a Live Q&A with one of our trainers, showing off his knowledge and encouraging viewers to sign up for a training session.

2. Have an Outline or Direction

Even though Facebook Live is relatively spontaneous as far as content mediums go, it’s still a good idea to craft at least some sort of outline, depending on the intent of your video.

This goes hand-in-hand with having an objective in mind, like the way you organize your speaking points should point Live viewers towards your goal – don’t go Live for the sake of going Live!

Before you go Live, outline your talking points and go over them with your co-host (assuming you have one). Get at least a rough idea of what you want to say, as well as any specific points or examples you’re sure you want to include.

My colleagues did a Live video a few months back about using content upgrades to generate leads for our sales team. Though it wasn’t without its hiccups, one “victory” of the broadcast was the way we organized it. It was clear and structured, highlighting the different steps of the process and the tools (within our product) viewers could use to generate leads for their own team.

Having an organized outline based on the goal of communicating the value of Wishpond and driving signups helped immensely with the quality of our broadcast.

That being said, don’t be afraid to go off-script – it is Live, after all! Be loose and have fun with it!

Even after you’ve announced your live video, many of your would-be viewers won’t show up right at the start of your broadcast.

Because of this, you’ll want to put together some sort of pre-show to fill time in your Live broadcast leading up to the start of your presentation (whatever that may be).

Don’t jump right into the meat of your content the moment you go Live. Either go Live 15-20 seconds before your scheduled start time to let people come in as they get notified, or start on time but don’t get into your content until a decent amount of people join your show.

You can do a couple of different things for this “pre-show” portion. If you’re not up to entertaining, feel free to pop in a countdown timer to get people ready and waiting. If you do feel like interacting (and we recommend you do), talk to your viewers. Welcome them to the broadcast, answer their comments, and get them excited for the show to start.

This is also a prime time to get your viewers to share your video – remember, Live videos get a massive boost on News Feed placement, so getting your fans to share your Live broadcast can significantly increase its organic reach.

4. Interact with Your Viewers

One of the principal benefits of Facebook Live is the fact that it allows you to interact with your fans in real-time, meaning you’re about as close to face-to-face as you can get without actually meeting them.

Though it’s not necessary, we’d recommend you put at least some effort into responding to fan comments and answering questions! It’s an easy way to make your Live broadcast super engaging, and it makes fans feel appreciated, meaning they’re more likely to stick around and watch.

At the start of your broadcast, greet people by name as they join. You don’t have to get to every single person, but acknowledging your viewers gets them pumped up for the upcoming broadcast.

A Live video is a special occasion, and as far as promotion goes, you’d be well off treating it like a webinar.

By this, we mean you should put as much effort as you can into getting as many people as possible to show up for the Live broadcast as people, even though they’ll be able to watch it back later once the replay has gone live.

Here are a few ways you can make sure your Live video reaches as many people as possible:

Live Videos are unique in that people can join anytime during the broadcast.

It’s great in the sense that people don’t need to be ready beforehand – they can jump in as soon as they see it on their News Feed.

On the other hand, it can be tough as a content creator because people who join your video late might not be able to follow what you’re saying.

There’s no worse feeling in a Live broadcast than having your audio or video randomly cut out, or watching your broadcast back and realizing everything is blurry, or you can’t hear anything.

Luckily, these are all issues you can easily avoid!

Before you double-check your setup, put some effort into making it as good as possible. Aim for high quality and reliability – an iPhone 7+ camera might be better than your 2012 MacBook’s webcam, but it also has a higher chance of dying while you’re broadcasting.

Pick a reliable setting as well – bright, solid-color backgrounds work great (see below). If you can, do a practice run-through with all of your hardware to make sure it’s all working.

Here are some quicker audio-visual rules of thumb:

Though we don’t condone or recommend it, there is a way to stream a Facebook Live video without actually being Live.

Without going too far into detail, Facebook allows you to broadcast Live to your page using an external program, such as Open Broadcasting Software (OBS). Because OBS can stream video and audio from a number of sources, you could technically stream a pre-recorded video to Facebook Live using the software, just as Tesla did in the example below.

Third-party broadcasting programs like OBS can also be helpful if you’d like to edit your videos slightly before they go Live. These cases might include adding overlays (like logos or graphics, as you can see below) or if you’re just not sure you’ll get it right on the first take.

That being said, don’t chop up your video or stream a professionally edited video as if it’s Live – your fans will know, and they probably won’t like it.

If you’re considering making Live video a big part of your social media marketing strategy, it’s essential to maximize the number who show up to your broadcasts.

One way to increase the chances your fans will tune in is to get them to turn on Live notifications. We touched on this earlier in the article, but it’s important enough to merit its own point.

We’d create a post or graphic with the following information, and maybe append it to your Facebook Live announcement mailout, too.

Here’s what your viewers need to do: 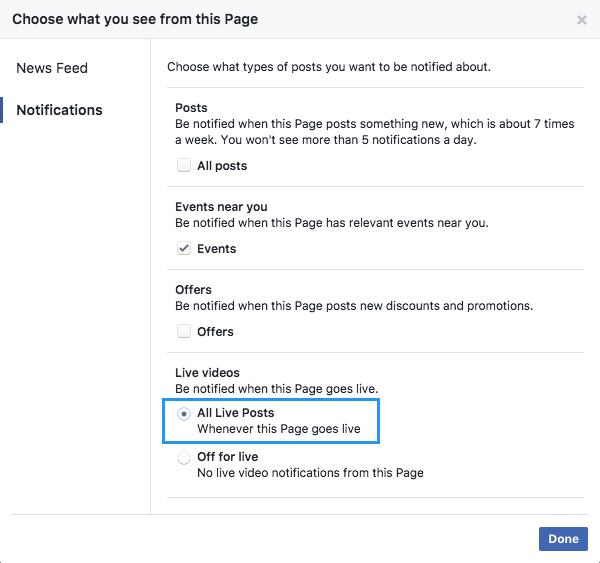 And that’s it! It’s super simple, and you now have the benefit of having your fans be notified every single time you go live.

This increases the effectiveness of future Live broadcasts, too, and your viewers only need to do it once (though we’d add this information to every Live announcement for new fans or people who haven’t already done it).

Finally, add some sort of CTA to your Live broadcast. This is a tactic that will give you the best chance at generating some kind of immediate return on Facebook Live.

Either add an “ask” to the end of your video (or sporadically throughout it) to direct viewers towards your ultimate goal, whether that’s your e-commerce store to get them to buy the product you’re highlighting in your video, or to a sales page to get them to book a call.

One great way to add this without needing to bring it up during your video continually is to use OBS (or another software) to add it to your broadcast as an overlay. Make it unobtrusive, so your video is still the primary focus of the broadcast, but visible and enticing enough that people will act upon it.

Either way, make sure you give viewers an avenue to convert in some way – trust me, driving a sale or demo from a social media marketing strategy is a good feeling.

There you have it – 10 awesome tips and strategies to think about when you’re planning your next Facebook Live video. Hopefully, you’ve learned something new about this rapidly growing video format!

If you have any questions about Facebook Live (or just Facebook in general), we’d be more than happy to answer them in the comments below.

If your business needs help with social media marketing in McKinney, TX., please call us at (469) 907-1057.  Luce Media has deep expertise in Digital Marketing, B2B Marketing, Internet Marketing and is a well-established Digital Media Consultant in McKinney, TX.

20 Creative Ways to Market Your Business on a Budget